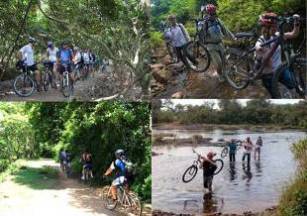 Cycling to Ancient Temple( Option A )
Siem Reap – Ancient Temple
This cycle tour begins with a ride to the ancient capital of Angkor Thom. Once arriving at the South Gate of Angkor Thom you will need to carry the bike up a small wall which you will then ride along to the West Gate and Bayon Temple. Lunch will be taken in a small restaurant by the temple. After lunch ride out of Angkor Thom via the North Gate and then turning on to a small pathway into the jungle leading to Preah Khan through the south hidden entrcontinues through the jungle to Ta Nei followed by Ta Prohm. Ta Prohm is very well known and is being swallowed by the jungle and trees. Returning to Siem Reap. Ride is approximately 30km
Enjoy Your Trip!
Cycling to Rolous Group ( Option B )
Siem Reap – Rolous Group
This ride takes you off the beaten track passing through a small village where you will see seasonal activities like rice planting or harvesting. You will also be able to try a local snack. The ride will take in one of the obscure Angkor ruins within in the Roulos group called Prasat Prei Monti. It is thought this temple may have been the state temple of Jayavarman III (c. 842-877 AD) or his successor Indravarman I (c. 877 - 889). Lunch is taken in a small restaurant near the temple. After lunch continue exploring the Rolous group. Bakong, Lolei and Preah Ko temples. These temples represent the remains of the first major capital of the Khmer Empire and the earliest of sites of the 600 year Angkor period. In the late afternoon is the return leg to Siem Reap. Ride is approximately 25km
Enjoy Your Trip!
Cycling to Angkor Thom( Option C )
Siem Reap– Angkor Thom
This ride is to the Ancient Capital of Angkor Thom to visit the West Gate. The West Gate has huge statues depicting the churning of the ocean. You will need to carry the bike up a small wall to ride along the West Gate. Then you will follow a hidden dirt road to the Western Baray. This is the largest of the two main reservoirs constructed during the Khmer Empire around the 11th century. Lunch will be taken at a small restaurant in the village before returning to Siem Reap in the late afternoon. Ride is approximately 20km
Enjoy your trip!
Cycling to Banteay Srei Temple( Option D )
Siem Reap – Banteay Srei Ancient Temple
This is an exciting bike tour exploring some outlying sites. Ride your way through the Preah Dark village to the most beautiful deep cut carvings and colorful temple of Banteay Srei. Banteay Srei was built by king Rajendravarman V in late 10th century. The walls of Banteay Srei are densely with some of the most beautiful, deep and intricate carvings of any Angkorian temple. Lunch at local restaurant. Following this is Banteay Samre a temple located east of the East Baray. Built under Suryavarman II and Yasovarman II in the early 12th century, it is a Hindu temple in the Angkor Wat style. It's then back to Siem Reap. Ride is approximately 10km
Enjoy Your Trip!
Cycling Tour to Floating Village( Option E )
Siem Reap – Floating Village
This tour takes on the rugged road along the Siem Reap river to Tonle Sap lake. This shallow lake boasts the largest natural freshwater body in South East Asia and flows into the Tonle Sap river. Here you will enjoy a short boat trip exploring this famous lake where hundreds of Cambodian and ethnic Vietnamese families live. Lunch at a local restaurant. A short visit to the handicraft workshop on the return will remind you of the artistic skills of the Khmer people during the great empire. Ride is approximately 25km
Enjoy Your Trip!

Cycling to Kbal Spean( Option F )
Bike through the countryside to Kbal Spean and the river of 1000 lingas. Hiking up the mountain through deep forest to see the engravings carved in the river bed just below the water. Walking back to the car park for some lunch. After lunch on the ride back you will visit Banteay Srei a colorful temple with beautiful deep cut carvings. Late afternoon a van will take you and the bikes back to Siem Reap. Ride is approximately 15km
Enjoy Your Trip!
Cycling to Kampong Phluk( Option G )
Siem Reap – Great Lake

Cycle to Kompong Pluk. This is an adventurous day trip combining biking to the Rolous group of temples and boating on the great  lake.Lunch at a local restaurant. Returning to Siem Reap via the hidden road through local Khmer villages. Ride is approximately 50km
Enjoy Your Trip!

Cycle off the beaten track through local villages to the remote and only recently discovered temple of Beng Mealea. You will be able to enjoy some lunch near the temple before driving back in the van with the bikes to Siem Reap. Ride is approximately 15km
Enjoy Your Trip! 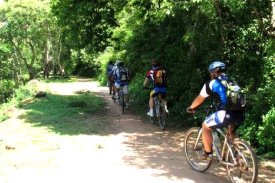 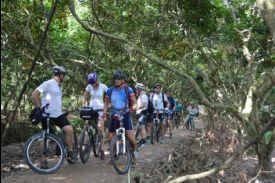 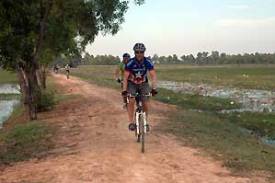 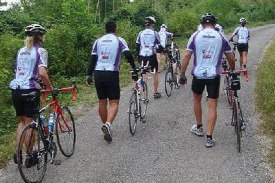 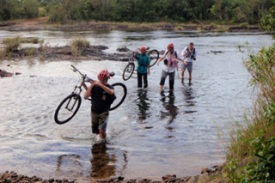 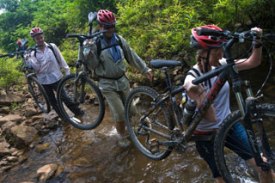 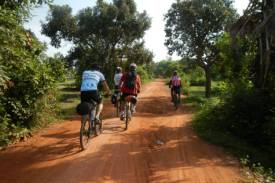