Day 1: Temple visit
Morning: Meet your Tour guide and driver at 08:00 AM at the lobby hall of Hotel
Excursion to the South Gate of Angkor Thom, both sides of the south gate bridge have a demon and a god statue, who are holding the King Cobra called Naga Vasuki. Keep traveling to Bayon. Explore this important temple with its many captivating giant stone faces. It has 54 towers in total and each tower has four faces. It is at the center of Angkor Thom. Walking out from the north entrance towards Baphoun. You will then find yourself at the Elephant Terrace. This used to be the audient hall for the king. Keep on to Ta Prohm ( famous after the Tomb Raider movie) with its exciting interplay of stonework, nature , big trees and roots that cover the top of the temple. Lunch break

Afternoon: After lunch, go to visit Angkor Wat, admiring this architectural wonder and the excellent bas-reliefs. It is worth walking a little between the outer laterite wall and the inside of the moat for a tranquil scene of rural life. Then climb up Bakheng mountain for a beautiful sunset. Back to hotel.
Day 2: Temple visit
Morning: Meet your tour guide at hotel lobby and drive to Kbal Spean, which is located 50 km from Siem Reap. It takes about 1h to reach the site and you will spend a moderately easy 45-minute Uphill walk through the woods. Kbal Spean means literally “the head of the river”. This is one of the rivers of 1000 lingas made up of unique Lingas stands chiseled into the riverbed of the Siem Reap river. It was believed that the lingas spiritually fertilized the waters that fed the Eastern Baray and irrigated the rice fields. lunch at a local restaurant.

Afternoon: Proceed to the BanteaySrei temple (10th century) regarded as the jewel in the crown of classical Khmer art. The tenth century temple of Banteay Srei is renowned for its intricate decoration carved in pinkish sandstone that covers the walls like tapestry. Banteay Srei was a new name which meaning in Khmer is "Citadel of Woman". Then visit BanteaySamre, one of the most complete complexes at Angkor due to restoration using the method of “anastylosis”. The name Samre refers to an ethnic group of mountain people who inhabited the region at the base of Phnom Kulen and were probably related to the Khmers. No inscriptions have been found for this temple, but the style of most of the architecture is of the classic art of the middle period similar to Angkor Wat. The proportions of BanteaySamre are splendid. A unique feature is an interior moat with laterite paving, which when filled with water must have given an ethereal atmosphere to the temple.

Day 3: Koh Ke-Beng Melea tour
Morning excursion to Koh Ker, the remnants of the Capital of Angkor. From the time of Khmer Capital was first moved to the Angkor area in the late 9th century. A trip to Koh Ker takes the better part of day out of Siem Reap and is usually combined with a visit Beng Melea.

Afternoon Visit the jungle clad Beng Melea, an important temple considered a blueprint for Angkor Wat. The temple is largely overrun by vegetation and very lightly tourists, giving it an adventurous, Beng Melea is located 63 Km ease of town and is often combined with trip to Koh Ker. Late afternoon return to Siem Reap town and overnight,
Day 4: Chung Khneah
Morning: Heading to the Tonle Sap (great lake). On the way to the docks you will see amazing villages on stilts along the road, rice paddies and lotus ponds. On the lake you will use a private wooden boat with engine to explore the Cambodia, Vietnamese and Cham communities on the floating villages where all life takes place on the water.

Day 01: Arrival at Siem Reap
Upon arrival, you will be greeted at Siem Reap International Airport and transferred to a hotel by our driver for check-in and relax after long flight journey. Dinner and overnight in Siem Reap.
Day 2: Siem Reap tour
Morning: After breakfast at hotel, you will be met by our guide and taken to the South Gate of Angkor Thom. Both sides of the south gate have a demon and a god statue, who are holding the King Cobra called Naga Vasuki. Keep traveling to Bayon complex. Explore this important temple with its many captivating giant stone faces. It has 54 towers in total and each tower has four faces. It is at the center of Angkor Thom. Walking out from the north entrance towards Baphoun and then passing by Phimeanakas, with its beautiful lakes, you will then find yourself at the Elephant Terrace. This used to be the audient hall for the king. Back to town for lunch.

Afternoon: Continue to visit your temple tour to the unique interior brick sculptures of Prasat Kravan, Srah Srang ("The Royal Baths" was once used for ritual bathing), Banteay Kdei (surrounded by 4 concentric walls), and Ta Prohm (as known Tomb Raider Movie Temple) with its exciting interplay of stonework, nature, big tree and root cover on top of temple. Back to hotel for dinner

Day 3: Siem Reap-Floating village
Morning: Depart for visiting Angkor Wat at 5:00 A.M. for the beautiful sunrise. The temple complex covers 81 hectares and is comparable in size to the Imperial Palace in Beijing. Its distinctive five towers are emblazoned on the Cambodian flag and the 12th century masterpiece is considered by art historians to be the prime example of classical Khmer art and architecture. Angkor Wat's five towers symbolize Meru's five peaks - the enclosed wall represents the mountains at the edge of the world and the surrounding moat, the ocean beyond. Back to hotel for lunch

Afternoon: Heading to the Tonle Sap (great lake). On the way to the docks you will see amazing villages on stilts along the road, rice paddies and lotus ponds. On the lake you will use a private wooden boat with engine to explore the Cambodia, Vietnamese and Cham communities on the floating villages where all life takes place on the water.
Back to Town for dinner.
Day 4: Departure
Breakfast at the hotel and transfer to International Airport for departure flight...

Day1:Arriveat Siem Reap International Airport
Welcome on arrival at Siem Reap International airport by our driver. Transfer to hotel for check in and relax after a long flight journey. Free your free time and overnight.
Day 2 : Siem Reap -Ancient Temple
Breakfast at hotel 7:00 am Morning excursion to Banteay Srei Temple ( 37 km from Siem Reap). This temple is the most popular for tourists because of its wonderful pink stone. You can see the wonders of the perfect sculpture still walking from the second half of the 10th century. On the way back, enjoy contemplating life and the Cambodian countryside, dotted with beautiful rice fields, traditional houses and farm animals. En route, you will have the opportunity to visit local communities and stop over to visit the Museum of Mining named Akira Landmine Museum. Akira, who is the hero of CNN, works in demining team in Siem Reap, where you will discover history of war and weapons which were used in Cambodia war from 1970 - 1993.Then, visit the temple of Ta Prom, with its thrilling game of rock , nature, tree root and cover the top of the temple. Break for lunch at Local Restaurant.

Afternoon: Visit Bayon, Baphuon , Phimeanakas , Elephant Terrace , Leper King, South Gate of Angkor Thom , then continue the temple of Angkor Wat. Return to hotel for dinner and overnight.
Day03: Jungle temple with floating village.
After breakfast, keep going on to Beng Mealea, which is Lost in the jungle and almost forgotten by the local population. The little explored temple of Beng Mealea (XIth c) is waiting to be rediscovered by the adventurous travelers. The sprawling jungle temple covering over one square kilometer is largely overrun by vegetation. Constructed in a distinctly Angkor Wat style, Beng Mealea preceded and may have served as a prototype of sorts for Angkor Wat. After that, drive to the Tonle Sap Lake (the largest fresh water in South East Asia) to see the fascinating floating Village called Kompong Khleang and its attraction is beautiful river with flooded forest, fish specials and water birds. The landscape of the lake edge with the green grass field and village houses on high stilts above the water. Back to town for dinner. After dinner, you will go to visit a beautiful night market till 22:30 pm.

Day 04: Les Antisan Angkor-Departure
After breakfast, go to visit Artisans Angkor which is a Cambodian social business whose purpose is to create job opportunities for young people living in rural areas, while reviving at the same time traditional Khmer craftsmanship (stone and wood carving, painting on statues and on silk, lacquering, and silver plating). Then, transferred to airport for departure.

DAY 1: ARRIVAL ? SIEM REAP
Meet and greet on arrival, welcome then transfer to check in, go to visit ARTISAN D’ANGKOR. A short stop at WAT THMEY or Killing Field contains a unique glass-walled stupa containing the bones of victims of the Khmer Rouge. Then, stop at the WAR MEMORIAL MONUMENT, it is dedicated to those who sacrificed their lives in the civil war.
One hour stop visit NIGHT MARKET & PUB STREET, Dinner at local restaurant and overnight in Siem Reap.

DAY 2: SIEM REAP
The Phnom Kulen mountain range is located 30 km northwards from Angkor Wat. Its name means "mountain of the lychees". There is a sacred hilltop site on top of the range.
Phnom Kulen is considered a holy mountain in Cambodia, of special religious significance toHindus and Buddhists who come to the mountain in pilgrimage.
It also has a major symbolic importance for Cambodians as the birthplace of the ancient Khmer Empire, for it was at Phnom Kulen that King Jayavarma II proclaimed independence from Java in 804 CE. Jayavarman II initiated the cult of the king, a linga cult, in what is dated as 804 CE and declaring his independence from Java of whom the Khmer had been a vassalage state (whether this is actually "Java" or "Lava" (a Lao kingdom) is debated, as well as the legend that he was earlier held as a ransom of the kingdom in Java. See Higham's The Civilization of Angkor for more information about the debate). During the Angkorian era the relief was known as Mahendraparvata (the mountain of Great Indra). Break for lunch

After that, Kampong Khleang is located on the northern lake-edge about 55 km east of Siem Reap town, more remote and less tourist than Kampong Pluk. Visitors to Kampong Khleang during the dry season are universally awestruck by the forest of stilted houses rising up to 10 meters in the air. In wet season the waters rise up to one or two meters of the buildings. Like Kompong Pluk, Kompong Khleang is a permanent community within the flood plain of the Lake, with an economy based in fishing and surrounded by flooded forest. But Kompong Khleang is significantly larger with nearly 10 times the population of Kompong Pluk, making it the largest community on the Lake.
DAY 3: SIEM REAP
Morning after breakfast, we visit THE SOUTH GATE OF ANGKOR THOM including BAYON TEMPLE. THE ROYAL ENCLOSURE PHIMEANAKAS, BAPOUN TEMPLE, THE ELEPHANT TERRACE and THE TERRACE OF THE LEPER KING. We continue fabulous TA PROHM. Lunch at local restaurant.
Afternoon visit: ANGKOR WAT The “7th Wonders’ of the World”. Sunset viewing on top of BAKHENG HILL. Buffet dinner with traditional show at local restaurant, overnight in Siem Reap.
DAY 4: SIEM REAP v DEPARTURE
After breakfast at the hotel, transfer to international airport for departure for next destination. 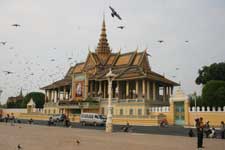